November 1st, 1755 was a sunny autumn day in the city of Lisbon, one of the most important and richest seaports of Europe at the time. The local inhabitants were profoundly religious and the city was preparing to celebrate Allhallows, with the obligatory burning of heretics in the afternoon. At 9:30 the inhabitants were alarmed by weak tremors, at 9:40 all the bells of the city begun to ring and seconds later higher buildings begun to shake and to collapse.
Three major earthquakes events followed in the next 10 minutes, destroying three quarters of the buildings in the city. Most people were killed by the collapse of the full churches. People fled in the direction of the seaport where the large places of the royal palace were situated, hoping to find shelter from the collapsing buildings or fleeing by sea from the city - and there they observed a strange phenomenon. The sea vanished and the estuary mouth of the Tejo was dry. At 10:10 a 15 m high tsunami-wave reached the city and destroyed the entire harbour, thousands were killed. After the earthquake and the tsunami a terrible fire break out, raging for five days and destroying what remained of the city. 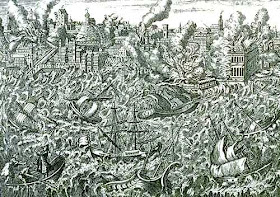 Fig.1. Lisbon, Portugal, during the great earthquake of 1 November 1755. This copper engraving, made that year, shows the city in ruins and in flames. Tsunamis rush upon the shore, destroying the wharfs. The engraving is also noteworthy in showing highly disturbed water in the harbour, which sank many ships. Passengers in the left foreground show signs of panic. Original in: Museu da Cidade, Lisbon.
The religious authorities exploited the situation and the superstitiousness of the people, declaring the earthquake a punishment by god and forcing people to processions in the city. But influenced by the European enlightenment for the first time in history a kind of crisis management was organized. King Joseph I. commissioned the peer and permanent secretary Sebastian Jose Carvalho e Melo (1699-1782, rewarded later by the king and declared Marques de Pombal) to supervise the rescue of the injured, the dispose of the corpses and the reconstruction of the city. Asked what to do Melo, follower to the enlightenment and convinced rationalist, responded:
"Bury the dead and heal the living."
The earthquake had wide-ranging effects on the society and culture of the time. The earthquake had struck on an important church holiday and had destroyed almost every important church in the city, causing anxiety and confusion amongst the citizens, theologians and philosophers. The earthquake had shaken the naive believe in a merciful god and for the first time an earthquake was explained as a natural event.
David Bressan on Monday, November 01, 2010
Share